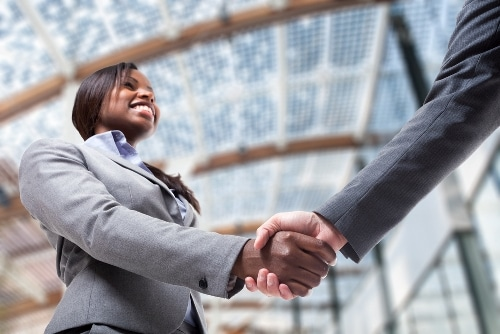 Getting a job using your second language

Knowing other languages in a world that, thanks to globalization, has forced people to be bilingual and almost makes them forget their mother tongue definitely, comes in handy when looking for a new job.

Numbers do not lie; today, nearly 60% of job offers require the candidate to master a second language. English and German are taking the lead on the list for the most popular languages required by employers, especially in engineering, finance, new technologies, and health.

However, according to recent surveys from Adecco,  and the Center for Sociological Research (CIS) in Spain, five languages will prevail among job seekers in 2016. To our surprise, these languages are Italian, Portuguese, German, French, and ever-present English.

An astounding 89.5% of current job offers require a second language, so it is time to enroll in the language course of your choice. French is on the list since it is the official language of over 30 countries and as one of the five official languages in the United Nations; it also stands out in the touristic and pharmaceutical areas. German — or Europe’s second most spoken language—, stands out in the tourism sector, as well as those languages mentioned above. Perhaps the most shocking fact about this list is to see the “nonna’s” mother tongue on it. Italian has had an impressive boom these last years in Europe, especially in Spain. Brazil’s peak as a first-power economy in Latin America led them to appear on this list and the fact that it is the official language in six countries. The near future looks very promising for the Portuguese.

Do we really need to say something more to convince you to go ahead and learn a second language? If you need a little extra motivation, Laura Centeno, Country Manager for People Working, indicates that a bilingual person could earn 20% more than those who speak only one language.

Posting your resume to the right job site mix
Feb 19, 2020
Use the right mix of job websites in your job search methods.  Many job seekers focus on big job websites such as  indeed.com.  But according to experts, unless you're in a high-demand field, this is one of the least effective job search methods, with only about 10% (at best) success rate. So don't spend more than 10% of your time at this activity. Here are guidelines for making good use of your time online: Explore niche, or specialty, job boards. Don't just post on Monster. Also, look at sites like LiveITjobs.com  for technology or Ebberhealthjobs.com  for health care. Target websites of companies you're interested in. Determine which companies to target and post resume to their sites. Better yet, contact these employers directly. Consider regional job boards. To find these boards, type your state and the words "job board" into Google (e.g., Minnesota job board ) or try your local library's website. Try "aggregator" sites like indeed.com,. These sites combine search results from job boards, company websites, professional associations, and other sources. Try professional association websites. Professional associations often post jobs for their members. View the Professional Association Finder to explore options. Check out Avacko.com, which includes four job bank sources, including your state job bank. But since experience shows it's not the best way to get noticed, it's helpful to use a few different methods, including networking your resume in person.
Read more

Stretching your Salary like a Pro
Jan 23, 2020
How to stretch your salary like a pro We have all been there. We have all found ourselves without a cent in our pockets on the last days of the month, yet we never seem to know where all the money went to. In a world where the  global  economy deteriorates more and more each day, everyone should know how to manage their money in an efficient manner. It does not matter the amount of money we make, if we know how to manage it, we will be able to stretch it without being financial experts. Is this really possible? The secret to saving money is –pause for dramatic effect- establishing priorities. But how do we know what to give priority to? If your hard-earned money is vanishing at the end of the month like magic, it is time to sit down and evaluate your expenses once and for all. Planning has to become a monthly or even a daily routine for messy spenders. First of all, there are three things that must be taken into account: income, debt, and expenses. The easiest part is establishing our income, the rest will be like seeing our worst nightmares come true, but it will be over soon. No one actually likes knowing how much money they spend each month, but the good thing about planning is that we can figure out how not to bleed out our bank accounts each month and maybe even save up to a 10% for that beach trip you are dying to take. The experts have spoken, and they recommend we divide our income this way: 30-35% for living expenses (including utilities). 16-20% for food and groceries. Invest 17-19% in transportation (including insurance, gas and public transportation). 5-7% for clothes and services (including dry-cleaning, washing, and drying). Invest 5-9% in health (insurance, pharmacy expenses, etc.). 3-6% for entertainment (it cannot be all work and no play). Save 2% - 10%. For miscellaneous expenses like newspapers, education, personal grooming, contributions, etc. destine about 7% to 12% depending on your other expenses. Once we have a clear vision of where our money is going, it will definitely be easier to organize and follow our parameters each month, until we get a constant flow on our bank accounts. There are thousands of useful apps to help us get our prioritizing on (Daily Budget for iPhone, for example), but the most important thing is taking that first step towards economic stability. All we have to do is reach out and take it.
Read more
Websites to post jobs in Canada
Dec 30, 2019
Canada General job boards Wondering where to post jobs in Canada for low rates. We have put together a list of job sites where you can post jobs for very cheap rates in Canada. These job sites help recruiters post, promote, and fill new job openings. The job posting websites listed here are designed for sharing all kinds of jobs, in any industry, and provide free access to networks of thousands of job seekers. 1.   albertajobhunt.com Albertajobhunt is a Canadian job board serving job seekers in Canada. HR departments and recruiters post jobs at low, low rates. Employers post an unlimited number of vacancies to the job board. There are over half a million job seekers active on the site, and employers can view their resumes online and find the best candidates for their open job positions. Job seekers can post resumes and set up job alerts for free 2. avacko.ca Avacko.ca is another Canadian jobsite that caters to the recruitment needs of job seekers in Canada. It has a trial package that you can try before you buy. The website harnesses the power of syndication to streamline the recruitment process. Recruiters can create an unlimited number of open job postings, which can then shared with up to 20 different job boards, including sites such as LinkedIn, CareerBuilder, Trovit, and Indeed. 3.  bcjobhunt.com Located in British Columbia, this site serves the labor requirements of employers and recruiters in British Columbia, Canada. In contrast with other job boards, BCjobhunt`s' recruitment tools are many. There is an applicant tracking system to help with the recruitment process. recruiters can email applicants while on the site. 4. canadajobscareers.com Canadajobscareers is a big website that serves jobs from all categories from anywhere in Canada. Browse thousands of Jobs in Canada and post jobs and resumes for free. Whatever industry or field you're working in, this jobsite has a  job  for you. Search thousands of permanent and temporary jobs. Search  Canadian jobs , explore careers, subscribe to job alerts, sign up for Job Match, and find tools and resources for employers 5.  healthcarejobscanada.com This website caters to job recruitment for the health care sector in Canada. View hundreds of healthcare job vacancies across Canada including opportunities in nursing, pharmacy, physiotherapy, general practice, and specialized roles.  6.  ontariojobsearch.com Ontariojobsearch offers job postings to all recruiters in Ontario, Canada for a small charge saving thems thousands of dollars. Thousands of resumes are received from new job seekers each week, allowing recruiters and employers to find great candidates only by using the resume filters available on the site. 7.  quebecjobhunt.com Quebecjobhunt is a recruitment website in Quebec, Canada that hosts thousands of jobs posted by recruiters and employers in Quebec. The benefits of 2000,000 unique visitors every month and allows employers to post to one of 60 industry-specific job boards. The site offers a free trial for ten days to use.  8. nursingjobscareer.com Nursingjobscareer is a nursing recruitment website for Canadian nurses.Here job seekers can apply to positions such as Registered Nurse, Registered Nurse - Medical/Surgical, Registered Nurse - Infusion, and more!
Read more
Share: